What if Whitney Houston Stayed with Bobby Brown

I know this sounds absurd but look at this as a hypothetical scenario. Hear me out. First off, did the media alienate Bobby Brown (the lion) from his family? Second, with Bobby Brown removed from the picture before Whitney Houston turned up Dead! Was she that better off without the ‘King of the Stage’? Now they’ve found their beloved daughter, Bobbi Kristina, who just inherited millions, unconscious. In an eerily similar way as her mother, Whitney Houston.

All I know is this, I saw the protector of a family chased away from it, I see millions of dollars at stake!”

Does this seem rational? Speaking as a fan, my question is, would these tragedies have happened if they still saw Bobby as the leader of this family? For the few who listen, on the essence of family structure, the father is ALWAYS head of the home. His financial situation or his shortcomings as a person should never substantiate his respect. Or lead to anyone rejecting his fatherly protection, his leadership or his God-given right as a head of his family. 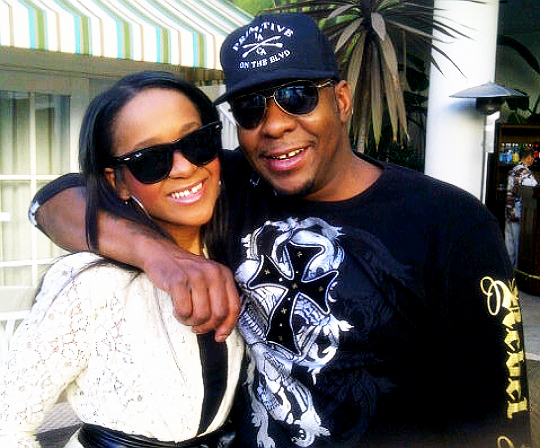 If you notice, the media is referring to Bobbi Kristina as Whitney’s child. They report this tragedy as if they’re careful not to vindicate the “My Prerogative” singer as the alpha male of this family. Yes, I know, we all think he was a bad influence. Ain’t that what the media insisted..? To all the know-it-all advisers who emphasized that Whitney would be better off with a new man and Bobbi Kristina with a stepfather, I ask you, ‘what are you saying now?

I asked the above questions because,
through the media, it was very easy to turn the public against Bobby Brown.”

Yet, the  “Don’t Let Me Die” singer has stepped forward, EARLY! To nip the bud, urging that his daughter “was never married” to Nick Gordon, who stood to inherit millions he’d married her. However, the trouble causing media has failed to point to the fact that, Whitney Houston and Bobbi Kristina were alive and happy when the “Nobody Does It Better” couple were together? Was Bobby Brown in somebody’s way? Why were the tabloids so determined to incite a split between this couple? To save Whitney from Bobby? All Bobby had to do was get clean, and he’s done that for 8 years now. None of us know the private details of another family. So we never can tell. I asked the above questions because, through the media, it was straightforward to turn the public against Bobby Brown. Brown is in a new relationship. If he would function in his new relationship, he could operate in the last one. So, “The Man I Wanna Be” singer can’t be that bad. It comes down to the right a few wrongs, his family embracing him loyally and the media staying out of their business.

If you notice, the media is referring to Bobbi Kristina as Whitney’s child.
They report this tragedy as if they’re being careful…”

Our society is ruined in such a way that the father is disrespected entirely in today’s family. Brown’s bad boy image only made it easier for people not to even ask, ‘what if he’s a protective father and leader’? Or, ‘why is the media not reporting this incident with his daughter, with a thoughtful demeanor towards him when he lost his wife in a divorce, and now his dear daughter is tragically ill? I know in my heart that someone could at least attempt to kill both Whitney and Bobbi – for their money. They had to have been more vulnerable alone than they were with Bobby around. But we live in a society where tabloids rule, the coroner’s finding and a police report cannot be easily refuted. If you can’t prove something, you can’t call it. We all need proof. So Houston’s death was marked, a drug-related accident. As opposed to the murder that it could have been.

Was she that better off without the ‘King of the Stage’?”

Comedian Dave Chappelle once asked if it wasn’t “strange” that every time one of us goes down, the body turned up with “crack sprinkled all over it”? We laughed our guts out without peeping what he said. All I know is this, I saw the protector of a family chased away from it, I see millions of dollars at stake! I see a dead superstar, and now the kid who inherited the millions is in an Intensive Care Unit. *

But I’m just crazy, so I’ll let you tell it.